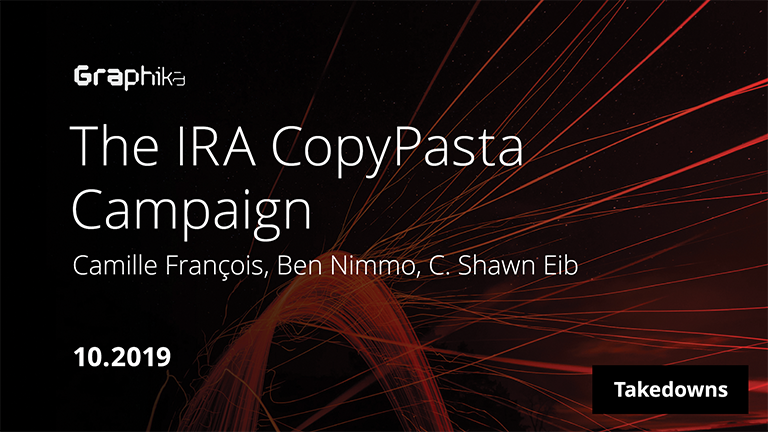 On October 21, 2019, Facebook announced the takedown of 50 Instagram accounts posting about US social and political issues and the 2020 election. Facebook concluded that the operation “originated from Russia” and “showed some links to the Internet Research Agency (IRA)”, the Russian “troll farm” that previously targeted US audiences and the United States presidential election in 2016.

This choice of targets and content echo the campaigns previously deployed by the IRA. Additionally, a few of the posts in this set reused or recreated IRA memes: this is why we named this campaign “IRACopyPasta”. That these accounts reused and recreated IRA content is insufficient grounds on its own to provide a firm attribution, but it aligns with Facebook’s own analysis that the operation showed some links to the IRA.

The operators went to great lengths to hide their origins, prioritizing operational security (OPSEC) over audience growth. Many of their posts consisted only of memes, without accompanying text. Posts that included text were usually sourced from viral posts made by American accounts. Facebook noted of this operation that it “had the hallmarks of a well-resourced operation that took consistent operational security steps to conceal their identity and location.”

Most of these accounts had low numbers of followers: over half had fewer than 5,000 followers, and only one, focused on environmental issues, had over 20,000. The total number of posts for this operation was just under 75,000. The campaign appeared to be a recent creation, using purpose-made accounts rather than accounts compromised from real users. Some posts gained hundreds of likes but typically obtained orders of magnitude fewer than the American personalities they copied. The operation appears to have been active almost exclusively on Instagram. Nevertheless, it made heavy use of Twitter by posting screenshots of tweets from genuine American users to Instagram.