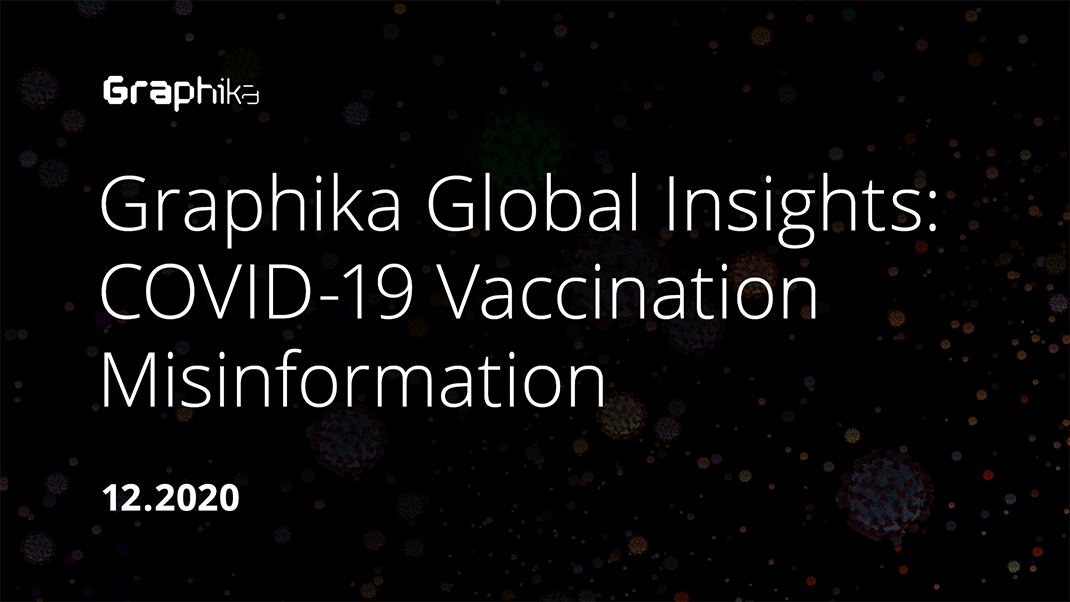 In April 2020, Graphika published an inaugural report, The COVID-19 “Infodemic,” covering analysis of the global online conversation about the coronavirus pandemic from December 2019 through March 2020. At the time, we detailed how the COVID-19 pandemic had facilitated the convergence of health conspiracists, political conspiracists, and technology conspiracists on a global scale, while right-wing groups had played a significant role in creating and amplifying mis- and disinformation content.

Since then, the QAnon conspiracy group has continued to expand worldwide, the U.S. held its 2020 presidential election, and COVID-19 vaccinations have been administered in the UK and U.S.. The volume of COVID-19 vaccination misinformation has not declined since April; rather the established COVID-19 disinformation networks we described have shifted their focus to vaccines. While there were underlying efforts to spread misinformation about treatments and vaccinations throughout the year, these became more concerted with the announcements of vaccine approval, and more determined again when it began to be distributed.

The popularization of health misinformation has introduced new communities to anti-vaccination narratives, and QAnon has played a significant role in connecting entrenched anti-vaccination and conspiratorial fringe groups to more mainstream communities. These recent developments have again united existing COVID-19 skeptic and denialist communities under a common banner, which is to resist the notion of mandatory vaccination. Over the past month, we have seen disinformation targeting the companies producing vaccines, extreme “Plandemic” conspiracies shared alongside traditional anti-vaxx rhetoric, and the enduring participation of right-wing communities in these conversations, especially in the U.S., UK, and Canada. We have not found evidence of large-scale foreign information operations having any impact on the global vaccine conversation to date.

Overall, anti-vaxx narratives uniquely tailored to countries and regions are emerging, while the growing COVID-19 misinformation and anti-vaxx network connects conservative and vaccine resistant groups around the world. This analysis delves into the anti-vaxx narratives in Graphika’s global vaccine map, and analysis of the broader vaccine conversation will be covered in following posts. The following analysis tracks misinformation about the COVID-19 vaccine spread through Twitter from November 8, 2020 - December 8, 2020.

The conversation about the COVID-19 vaccine is happening at a global scale. Accordingly, it appears that emerging anti-vaccine narratives have become successful by playing on different historical and cultural reference points in each country.

For instance, in the UK, when the government approved a vaccine for use at the beginning of December, the word ‘thalidomide’ began trending shortly afterwards on Twitter. Similarly, Google Trends showed a huge spike in searches for the word ‘thalidomide’ coming from the UK in the hours after the announcement  on December 2nd. Thalidomide is a medication used to treat a variety of conditions, including morning sickness, that was administered to British pregnant women in the 50s and 60s and resulted in around 2,000 children being born with conditions like phocomelia and around half dying within a few months. While thalidomide has no connection whatsoever with COVID-19, the tragedies caused by thalidomide were resurfaced by some groups in an attempt to delegitimize the safety of the COVID-19 vaccine once it was approved.

Below are narratives emerging in countries that host a high volume of anti-vaxx conversation within their clusters, as well as accounts participating in the global conversation about the COVID-19 vaccine.

The anti-masker and anti-lockdown clusters are an established group of accounts in the COVID-19 network that have been resisting precautions taken to limit the spread of the virus since early spring. These accounts primarily spread content attempting to debunk established science and public health precautions to support their positions. The top followed, mentioned, and retweeted accounts from this group appear to be doctors and other members of the medical community, yet encourage their followers to question official public health precautions.

With the emergence of approved vaccines, a number of pseudo-medical influencers have also surfaced. These are highly influential accounts within the cluster both in terms of network analysis and the content they produce. For example, one former Pfizer employee posted a blog on October 16th claiming that the COVID-19 is "effectively over" in the UK, and that "there is absolutely no need for vaccines to extinguish the pandemic." Links to articles covering the major points in this post continue to be shared by COVID-19 conspiracy groups across Graphika’s maps over two months later. The credentials, connections, and ‘insider knowledge’ these pseudo-medical influencers claim to have (often in relation to highly respected medical institutions) lends an air of legitimacy and their arguments are often used as central evidence against a vaccine. The accounts and followers of these accounts often circulate scientific papers that have been debunked or widely dismissed by professionals in the medical field. These papers are said to show supporting evidence for various side effects of vaccines, such as sterilization and DNA altering, both of which are topics that have already circulated in Graphika’s maps alongside conversation about the COVID-19 vaccine.

A behavior that Graphika has noted since the beginning of the pandemic is that groups that spreadCOVID-19 misinformation often rely on tools and sources for conducting personal ‘investigations’, rather than relying on official channels of information. The website worldvaccinepoll[.]com – which is among the most highly shared domains among this group – is a seven-question poll that claims to “get the uncensored opinion of the world.” Questions range from “Was COVID-19 polticized by the mainstream media?” to “Do you support lockdowns or military involvement?”, and results have been used by countless accounts to argue against the vaccine and other public health precautions.

There are also notable attempts to discredit or cast doubt upon recipients of the COVID-19 vaccine. In the case of political and entertainment figures getting the vaccine publicly to encourage participation, videos of fake syringes circulated with claims that the vaccine was either fake or was not actually administered. Claims that the first UK vaccine participants were crisis actors, a common conspiracy about school shootings that alleges witnesses were hired performers, were amplified within this time period as well. 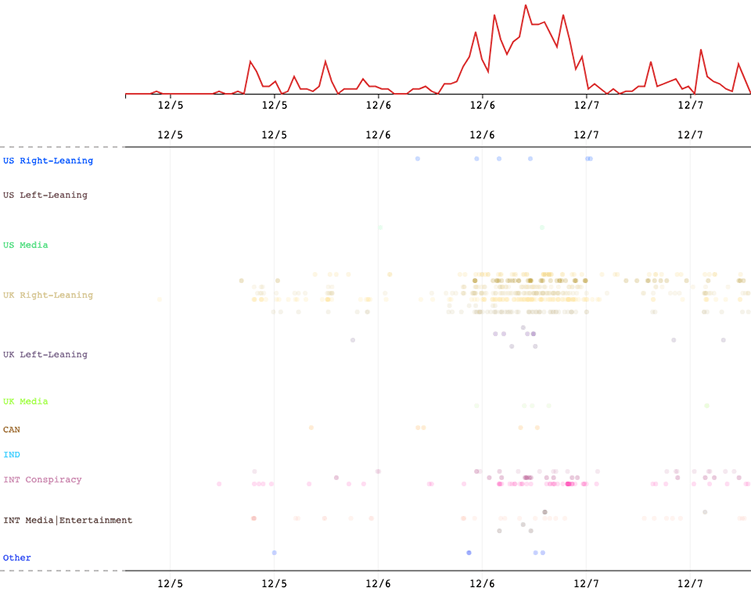 Shares of worldvaccinepoll[.]com were concentrated in the right-leaning and conspiracy groups of the vaccine network. In this map each dot represents a tweet containing the website from the respective group.

The American conservative group in the map remains focused on disputing the election outcome, but there is some evidence to suggest that their focus has started to turn to COVID-19 vaccine misinformation. #Hydroxychloroquine, #Vaccine, and #VAXXED (in reference to the 2016 documentary film) are the three most-shared hashtags after elections-related hashtags in this group. Other popular hashtags like #Learntherisk and #autism suggests that common anti-vaxx rhetoric is being amplified by this group as well.

The hashtag #CCPVirus is also among the popular hashtags in this group. The proliferation of anti-Chinese rhetoric that emerged in this group at the beginning of the pandemic could be fueled further by residual anti-Chinese sentiment spurred by election misinformation, another prominently shared narrative among accounts in this group. This includes allegations from conservative figures that China is working with Dominion voting systems to skew voting machines and Democratic politicians are working with and/or “owned” by the Chinese government. These claims are often amplified by Steve Bannon and Guo Wengui’s various media properties on platforms like YouTube and Gab. There will likely be renewed focus on Chinese ‘bioweapon’ conspiracies throughout the period of vaccine distribution across the US.

Graphika has noted on other platforms that far-right white supremacist accounts, predominantly on Telegram but also Gab and Parler, have recently pivoted to posting and sharing anti-vaxx narratives as a means of promoting their ideology, recruiting new participants to the far-right, and targeting their enemies online. These narratives fall under a number of overlapping thematic categories, including: white genocide, child protection, religious concerns, health complications associated with the vaccine, anti-semitism, and insincere, sarcastic messages of support for social and racial justice issues. In a disturbing trend, accounts that typically express hatred towards “non-whites” (including people of Jewish descent) have adopted the hashtags  #VaxTheBlacks, #VaxTheBlax and #VaxTheJews as part of a campaign meant to attract participants to their movement. Many accounts promoting these hashtags have done so in conjunction with the narrative that Black people and other minorities should be “vaxxed” before white people; this appears to be intended to function as a dog whistle for vaccine-skeptical “whites.”

The most popular hashtags and influencers in these conversations reflect the ability of the established anti-vaxx community to adapt narratives to the pandemic. The accounts most retweeted, mentioned, and followed by the international anti-vaxx group are a mix of established anti-vaxx figures, and COVID-19 conspiracy theorists that have risen to prominence throughout the pandemic and have become central to the COVID-19 anti-vaxx conversation, for example Judy Mikovits, Simone Gold, and Spiro Skouras. Simone Gold became well-known for leading the White Coat Summit in July which produced a discredited video of herself and other doctors proclaiming the efficacy of Hydroxychloroquine. Del Bigtree, Robert Kennedy Jr., and Sherri Tenpenny are long-standing, anti-vaxx influencers in this group that have recently used their platforms to question the safety and efficacy of the COVID-19 vaccine.

Various allegations of vaccine injury, COVID-19 conspiracy, and debunked science are a topic of particular focus in this core anti-vaxx group. The most popular hashtags include conventional anti-vaxx hashtags like #STUDY, #vaxxed, #learntherisk, and #vaccineinjury, and some more recently developed hashtags associated with COVID-19 conspiracies, like #covid1984, #thegreatreset, #gatesfoundation, and #scamdemic. These concepts are typically leveraged to support a well established anti-vaccine agenda that aims to undermine vaccines and the medical establishment. At the heart of the conspiracy theory surrounding the ‘Great Reset’, for example, is a real economic and social proposition made by the Head of the World Economic Forum, Klaus Schwab. This proposition is that the pandemic affords the opportunity to transform crucial industries and thus ‘reset’ capitalism via a ‘fourth industrial revolution’. This has been manipulated by conspiracists who believe that the pandemic was intentionally orchestrated in order to bring it to fruition, specifically that COVID-19 was created to force this revolution into motion.

With increasing action taken against COVID-19 and vaccine misinformation from platforms, this group relies on alternative content hosting platforms to save and share content. The most shared domain in this group is the alternative video-hosting platform bitchute.com, on this platform and others such  as brandnewtube.com users can freely post videos featuring false claims of vaccine harms and COVID-19 conspiracies with less risk of suspension. Graphika has noted a sharp uptick of links to these platforms shared within communities that ascribe to various political conspiracy movements, COVID-19 skeptics, and anti-vaxxers.

COVID-19 vaccine injury is of particular focus in this group. Anti-vaxxers have long amplified false and misleading claims about the dangers of vaccines, and narratives from this group often contain decontextualized information about the COVID-19 trials which play into these fears. For example, a recent report from Robert F. Kennedy Jr.’s Children’s Health Defense capitalized on allergic reactions from Pfizer's COVID-19 vaccine, despite the reactions being both anticipated by medical professionals and not cause for serious concern.

Other narratives about the Pfizer vaccine were focused on casualties and adverse effects. Russia Today covered the claim, for instance, that four volunteers had developed Bell’s Palsy after taking part in the Pfizer trial, while the Jerusalem Post warned its audience that two trial participants had died after taking the vaccine. Reuters reported that these claims are in fact true, but that no causality has been found between the vaccine and these side effects*.*

Finally, it is worth highlighting again that most of the misinformation and disinformation circulated in this map is originating with authentic accounts, and that we have found no evidence of large-scale inauthentic campaigns or foreign information operations having any impact on the global vaccine conversation to date.