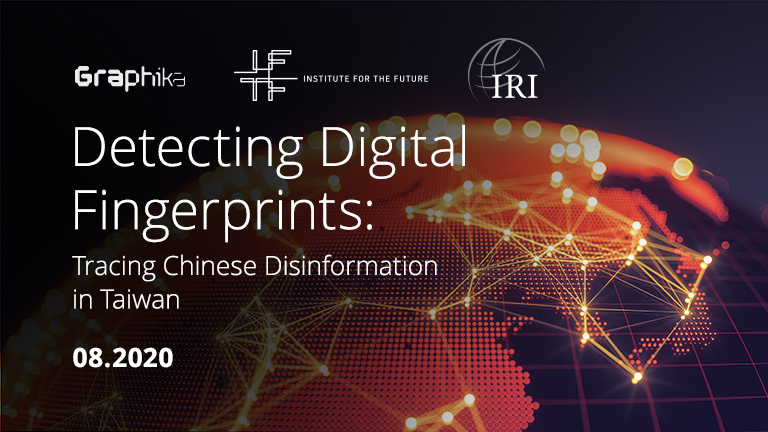 A Joint Report by Institute for the Future's Digital Forensics Lab, Graphika, and The International Republican Institute.

Taiwan is on the frontlines of the Chinese Communist Party’s (CCP) international influence operations, and what happens on the island often serves as a harbinger for how China will operate elsewhere. In 2018, the island’s local elections were subjected to myriad online disinformation campaigns2 that favored a Beijing-friendly agenda, attempted to undermine democratic integrity, and systematically attacked democratically elected politicians whose positions did not align with China’s strategic interests. However, despite the assertion of Chinese interference by several intelligence agencies and governments, clear evidence linking disinformation during the local elections to mainland Chinese actors has not been publicly shared.

This is not a unique scenario: governments around the world have discussed foreign interference campaigns without being able to share much public evidence to accompany these assessments. Many factors complicate the task of publicly sharing this type of evidence, among them privacy concerns linked to accounts that are often on private platforms,methodological concerns around standards of attribution in information operations (IO), and use of sensitive technical data in the process of analysis and attribution. Independent entities also face difficulties in their assessment of potential interference by China in the 2018 elections, notably because the Taiwanese online information space is unique and conducting a postmortem without consistent monitoring and real-time data collection is practically impossible. Yet, when asked whether a foreign actor was likely to target Taiwan’s 2020 Presidential and Legislative election with disinformation, Wu Jun-deh, Director of the Cyber Warfare and Information Security Division at the Institute for National Defense and Security Research (INDSR), said “Of course, the answer is China.”